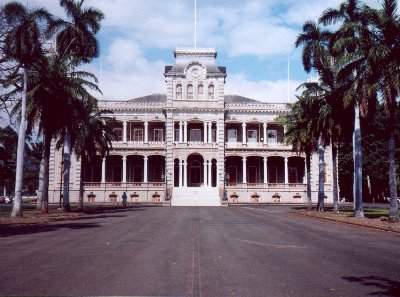 Prior to the orgin of Hawaii's land system in the 1840's, the kings were the sovereign owners of all the islands. The picture above is of Iolani Palace, the only Royal Palace in America. The original unit of land, the "ahupuaa," usually extended from the shore to the mountain top, with rights in the adjoining sea waters, providing occupants with the means of supplying all their wants. The sea for fish, the inland for coconuts, the valley for taro, the lower slopes for sweet potatoes, yams, etc. and the mountains for wood and hunting.

The next subdivision of land was called the "ili" and could be either subservient to the "ahupuaa" or independent. Within these were small areas called "kuleanas," which were houselots occupied by the common people, who also had certain native rights of fishery, water, and mountain products. These lands were often redistributed by a conqueror or a successor king.

In 1845 a major step to reform this system occured when a Land Commission was created by King Kamehameha III. The most important reform was the Great Mahele, or division of lands, which took place in 1848 and became the basis for modern land titles in the Islands. Old tenures were eventually changed to the allodial system of absolute ownership, and the interests of the government, crown, chiefs and common people were severed. As new claims were adjudicated by a board to determine ownership rights, Hawaii's ancient landholding system was gradually replaced. For this reason, a chain of title to Hawaiian land need only be traced back to the 1840's to the original grant or patent.

Today Hawaii consists of 124 islands situated in the Pacific Ocean. Of these, the eight major comprise a land area of approximately 6,470 square miles broken down as follows: Hawaii, 4,035 sq. mi.; Maui, 734 sq. mi.; Oahu, 617 sq. mi.; Kauai, 558 sq. mi.; Molokai, 263 sq. mi.; Lanai, 141 sq. mi.; Niihau, 71 sq. mi.; and Kahoolawe, 45 sq. mi. It is interesting to note that of this land, the State, County and Federal governments are the largest landowners, controlling approximately 39% of the total area. An additional 24% is owned by less than 6 individuals, corporations and trusts, many of which are descended from early missionaries and traders. As can be readily seen, this leaves approximately 37% for all other private individual landowners. 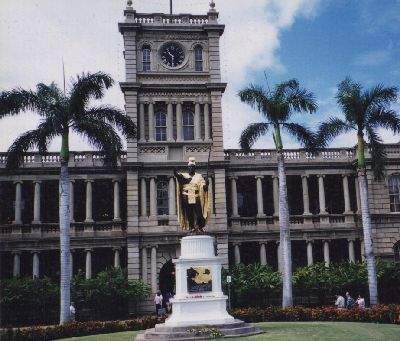 The picture to the left is of the Legislature Building, and Kamehameha statue. Originaly built as the King's Royal Palace by my great great grand father Robert Lishman, but taken over by the legislature. The island of Oahu is comprised of 386,188 acres, of which there are 92,583 acres estimated to be in urban districts, 154,882 in conservation, and 138,723 for agricultural use. The island contains the City and County of Honolulu, the smallest of the four counties in size, but the one which has nearly 3/4 of the State's population (836,207) and serves as the seat of the State government. Oahu is also home to the 40,000-student flagship University of Hawaii system and the state's banking and financial headquarters.

We like to extend a special thanks to Mr. John Reilly, Attorney with Pitluck Kido Sato & Stone and Trade Publishing Company, Ltd. for most of the above information.

In Hawai'i we have a much larger percentage of residential lands held in lease than most other areas.

When you buy a leasehold home, you're buying the right to use the home (or improvements) for a fixed time period, but not the land on which the house sits. An annual lease fee, usually fixed for a long term, is paid to a landowner.

Leasehold homes are significantly cheaper to purchase than homes (or improvements) made on fee-simple land, but beware, leases have much uncertainty attached to them. Many leasehold properties are 20 to 30 years old now and up for renegotiation from their original terms and the cost today can be high based on current market values.

Fee-simple homes also include the land on which it sits, cost more, but does provide greater security and resale value.