Diamond Head is one of the most famous landmarks on Oahu and the entire state of Hawaii. It has once been an active volcano, but hasn’t spewed any ashes for more than 150,000 years. The extinct crater and lookout point at the peak of it is a popular hiking destination for many. In fact, Diamond Head is one of the most photographed and painted spots on Oahu, adorning many wall calendars and postcards.

Located at the eastern end of Waikiki and right on the ocean, Diamond Head has already made an impression to early sailors. In 1825, British sailors noticed small sparkling calcite crystals in the beach sand nearby the crater and named the mountain Diamond Hill. This name was later changed to Diamond Head. This is how the crater got its English name.

Hawaiians believe the legend that Pele’s sister, Hi’iaka gave it the name because from a distance, the crater looks like the back and fin of a tuna fish. The Hawaiian name for Diamond Head is Leahi, a contraction of lae, meaning point of land and ahi, meaning yellowfin tuna. So Leahi means “point (of the) ahi fish.” From a distance, the mountain looks like the dorsal fin of the ahi fish, hence its Hawaiian name Leahi.

Diamond Head was purchased by the federal government in 1904 for $3,300. In the 1930s, a couple of gun emplacements for coast artillery defenses were built. After the attack on Pearl Harbor in 1941, further gun emplacements, pillboxes and foxholes were built on Diamond Head to be able to better defend Oahu in the future. Many of them still remain on the crater rim and one underground facility, the Birkheimer Tunnel, houses the headquarters for the State Civil Defense Agency. Today, the entire mountain and crater is a state park known as Diamond Head State Monument.

The first military reservation on the islands of Hawaii was called Fort Ruger and was built inside the crater of Diamond Head. It was purchased for $3,300 in 1905 by the US Government. The government considered Diamond Head the perfect place for a military presence because the elevation and steep mountain walls acted as the perfect spot to fire in a 360 degree radius at incoming ships in the nearby waters. Diamond Head Crater is now a state park and no longer used as a military facility.

About 300,000 years ago, there were small volcanic eruptions on the island of Oahu creating 3 significant craters in the area: Punchbowl, Diamond Head, and Koko Head. To the Southeast of Diamond Head is an area called Blackpoint, created by the lava flow from the eruptions. It’s interesting to note that the eruptions in some places covered coral reefs that now are over 100 feet above sea level, meaning the sea level was at least that much higher than it is now. It was an active volcano at one time, over 150,000 years ago, but has been dormant since and there’s no lava in the crater.

The name of Diamond Head became famous in the 1820’s when crews from British ships discovered calcite crystals on the crater. Because they believed they were diamonds, they named the famous volcano what it’s currently known as. Later, the British found that the crystals were, in fact, not diamonds.

Browse homes for sale in Diamond Head, HI. Can't find a listing that fits your needs? Try our advanced Hawaii MLS search. You can easily filter properties by location, price, amenities, and more to find exactly what you're looking for.

Experience true elegance in a relaxed setting by the sea. Magnificent ocean views and rare privacy from this luxuriously appointed residence located on a private lane wi...

360 degree tranquility. This Brand new home is a jewel masterfully set in Diamond Head. This home will inspire you. Expertly designed with careful thought given to every...

Nestled just below Diamond Head on the Gold Coast of Oahu, you’ll find a piece of paradise in this luxury ocean front home. The custom remodeled home features solid Merba...

Nestled just below Diamond Head on the Gold Coast of Oahu, you’ll find a piece of paradise in this luxury ocean front home. The custom remodeled home features solid Merba...

Considered among the best addresses on Oahu, Makalei Place offers privacy and a premier location on the slopes of Diamond Head. This beautiful 4-bed, 4.5-bath home which ...

Imagine the possibilities! This rarely available spacious property boasts 180-degree Waikiki, ocean, and mountain views. It is an amazing opportunity to create your troph...

Magnificent panoramic views from this Seaview home overlooking Diamond Head and the azure ocean from every room! Situated on one of the island's most prestigious streets ... 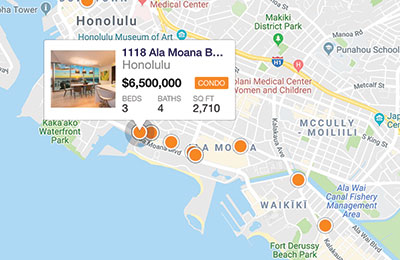